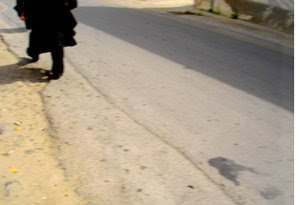 artists: Pep Aguareles, Eve Ariza, Helena Guardia, Susana Herrador
(Paradise consumer group)
from: Pricipat d’Andorra
This video intend to push to the limit the stereotyped image that people have of Andorra: a country prominent by its special offers, that attracts impulsive consumers.
This project claim to push to the limit the attitude of this kind of compulsive purchasers, using real and artificial situations.
The project takes place in a typical Andorran supermarket. realized in occasion of:
GOING BEYOND THE COUNTRIES ART
SMALL STATES UNDER UN-CERTAIN STEREOTYPES
Andorra Cipro Liechtenstein Luxembourg Malta Monaco San Marino
VIDEO SENSITIVE POSTCARD

After Rita Canarezza’s and Pier Paolo Coro visit, we started to work as a group in June 2005. We decided to work together because of this project and we created the group even if some of us never meet before. The conception and realisation of our video started in June and ended in the middle of November, when we presented it for the first time at the San Marino’s encounter. We began our project analysing the different stereotypes that exist about Andorra, but we finally decided to work in one of them: the idea of Andorra as a “supermarket-country”. Andorra as a “cheapest country” makes our distinction outside our boarders and till now the legend is still alive. With our video called “The paradise consumer”, we claim to push to the limit the stereotyped idea that turns around Andorra, working and exaggerating the compulsive attitude of this kind of consumers, who only visit us just for shopping. This project takes place in a typical Andorran supermarket called Andorra 2000, one of those that still receive the visit of organazed busses plenty of buyers. After exposing our project to its manager, the supermarket accepted a full collaboration with us. The project consists in starting some actions of direct consume with our figurants and waiting for the reaction of the anonymous purchasers who where naturally making their shopping Those actions had been filmed during the week-end of 16th and 17th November. Our intention was to show with humour what represents Andorra for people that visit us from other countries.
Posted by eve ariza at 1:48 PM